Joseph Richards and the Patent Hammer 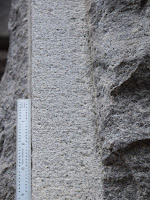 The patent hammer has a number of sharpened thin steel blades which are bolted into a heavy head, and is used for finishing granite and hard sandstones. The blades are called "cuts" and were available in sets of 4, 6, 8, 10, and 12 cuts per side by varying the thickness of the steel used for the cut. The most common jaw opening was 7/8", and other sizes from 1/2" to 1" were offered. Cuts were also used to specify the number of grooves per nominal inch, as an 8-cut finish. The patent hammer produced a grooved surface much faster than a hand chisel, and the cuts were easily removed for sharpening. Other names for the patent hammer were patent bush hammer, Scotia hammer, and patent Scotia hammer. Scotia hammers were usually smaller, with 5/16" and 3/8" jaw openings. The picture to the right shows patent-hammered work on Old City Hall, Richmond, VA. This YouTube video shows a bush hammered finish with a different hammer. Excellent photographs of patent-hammered work are in the 1938 booklet Granite in Architecture at Archive.org.

The patent hammer was invented by Joseph Richards (1784-1848) of Braintree, Massachusetts. The US patent was issued 20 Feb. 1828 for a "Stone-Working Tool". The retroactive patent application number is X5010 or 5010X. His invention spurred many other inventors' designs for patent hammers. There are at least 55 more US patents for hand hammers and chisels with multiple blades which can be removed from the head for sharpening. The US Patent Office classified them as mill picks or bush hammers, avoiding confusion with any other patented hammers. I have saved these patent applications and drawings into one pdf file, which is here. 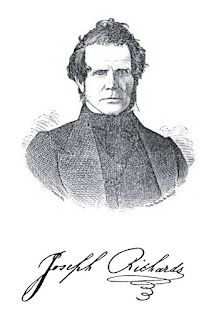 A History of Old Braintree and Quincy: With a Sketch of Randolph and Holbrook, by William Samuel Pattee, 1879

Mr. Joseph Richards (1), of the former firm of Richard & Munn, was a man of uncommon ability and intelligence, and was possessed of much inventive genius.  About the year 1831, he invented the bush, or axe hammer; which term is the more proper we are not able to say, as no name for it is to be found in any of the dictionaries, although this instrument has been in use about half a century.  The name of bush hammer is evidently local, as at Philadelphia and some other places, it is called axe hammer, from the several little axes being keyed into the cheeks of the instrument, and we think it the most correct name of the two.  There are six, eight, ten, or more axes connected with it. The number used depends upon the fineness the artisan desires to dress the stone.  This useful instrument to stone-cutters was first made by Mr. Richards, solid or wholly in one piece, for which he received a patent; since then improvements have been made upon it by constructing it in several pieces. [Richards' patent is for a design with several pieces.]

(1) Hon. Joseph Richards was born in Cummington, Mass., Aug. 20th, 1784, and was educated in the District School.  When about twelve years of age, he removed with his parents to the northern part of the State of New York, where he was engaged with his father in farming, until he was eighteen years of age, when he left home and came to Quincy.  His first engagement in this town was with President John Adams, as coachman, who after a few months’ service in that capacity, suggested to him that he was worthy of a higher position.  From those suggestions of Mr. Adams, he went to Abington, where he undertook the duties of a school teacher, a position for which by nature he was eminently qualified even at that early age. possessing as instinctive knowledge of human nature, he governed without force or coercion.  He was an ardent lover of the science of mathematics, in the higher branches of which he was quite proficient.  Form Abington he returned to Quincy, or “Braintree Neck,” (now Quincy Neck) in 1803, where he engaged, for many years, in quarrying and working stone with Bryan Newcomb, his future father-in-law, in the summer, and school teaching in the winter until the increase of the stone business in which he was engaged, engrossed his whole time.  Although obliged to abandon the profession in which he delighted, his love of knowledge continued unabated until the close of his successful life, Feb. 12th, 1848.  He was chosen to the State Senate for the years 1843 and ’44.  Mrs. Richards survived her husband a number of years.
If you have a Trow & Holden patent hammer as in the 1910 advertisement, please take note. In addition to the 4 large bolts, there are 2 steel pins holding the head together. These pins are ground flush so may not be visible. Clark Holden's patent drawing shows 2 smaller bolts in this position. As later manufactured, these were replaced with 3/8" pins. If you have one, do not attempt to pry the head apart unless absolutely necessary, and you must drive the pins out first. All parts except the bolts should be replaced in the same locations.
Posted by Mark Stansbury at 7:24 PM

Email ThisBlogThis!Share to TwitterShare to FacebookShare to Pinterest
Labels: Stone and Terazzo Tools