Because of the lack of published trowel and masonry tool histories, the information here is based on other sources that may be less reliable and certainly are incomplete. These include eBay and tools that I purchase myself that are the starting points for my research. I will write what I know as I learn it. If what you read here interests you, please check back often and look for revisions and corrections. Scanned catalogs are on Archive.org as pdf files. A few are links to other websites. Your photos and information are welcome. Please click on any picture to enlarge it. Comments are welcome, but any with links will be deleted as possible spam.

Tools labeled "Colonel Sheffield" have mystified collectors and others for at least 20 years. It was a house brand for Woolworths stores in the United Kingdom in the 1950s. The tools were manufactured by an unknown firm in Sheffield exclusively for Woolworths, and included trowels, paint scrapers, screwdrivers, and wood chisels.

The San Francisco, California firm of Nelson & Doble was a partnership of two blacksmiths, Thomas Nelson (1821-1907) and Abner Doble (1829-1904). Operating from 1855 to 1878, Nelson & Doble were "manufacturers of sledges, hammers, picks, wedges, stone-cutters’, miners’, blacksmiths’, horse shoers’, pavers’ and railway contractors’ tools."  Their 1872 ad went to to state, "These tools are manufactured from cast steel made expressly for our use, by the celebrated makers, Thos. Firth & Sons, Sheffield, England, and are warranted superior to any in the market."

Thomas Nelson was born 12 May 1821 in Nebthwaite, Lancashire, England and arrived in the US at age 14. In 1842 he married Elizabeth Walmsley in Passaic, NJ, and he would have been a journeyman blacksmith by that time. He was living in San Francisco by 1852. He and his wife apparently divorced, and in 1888 he married Margaret Jennings, who was 39 years younger.

Posted by Mark Stansbury at 5:42 PM No comments:

Posted by Mark Stansbury at 4:15 PM No comments: 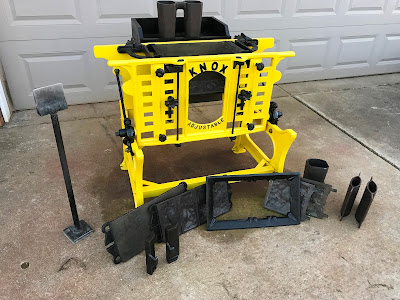 Thank you to a reader, Donovan, for sending these photos of his restored and unrestored Knox concrete block machines. His YouTube video
demonstrates making a block, and his YouTube channel has more videos about other block machines. 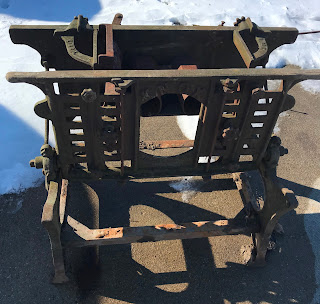 Posted by Mark Stansbury at 12:35 PM No comments:

Posted by Mark Stansbury at 8:52 AM No comments: