E. Tressing & Co. was a Chicago, IL,  manufacturer and dealer in locks and hardware specialties, including cement tools. The company was located at 179-181 Lake St. in 1904. The principal was Eric Tressing (1866-1937), who was born in Oslo, Norway and came to the US with his parents when he was a boy.

Posted by Mark Stansbury at 6:45 AM No comments:

Email ThisBlogThis!Share to TwitterShare to FacebookShare to Pinterest
Labels: Concrete Edgers and Groovers

Wonder Manufacturing Co., Washington Court House, Ohio, was a small manufacturer of ranges, heating stoves and a few other products, operating from the 1890s into the 1910s. The company took advantage of their iron foundry to make cast iron cement tools of a conventional design. Although no advertising has been found for the tools, a few of them have survived.


Posted by Mark Stansbury at 8:00 AM No comments:

Email ThisBlogThis!Share to TwitterShare to FacebookShare to Pinterest
Labels: Concrete Edgers and Groovers

Adamite Wheel & Manufacturing Co. is the only known Canadian manufacturer of concrete tools, including indent roller. Their primary product, which gave the company its name, was grinding wheels made from the mineral adamite. Their address in 1920 was 44 Ferguson Ave., Hamilton, Ontario.

Posted by Mark Stansbury at 8:33 PM No comments:

C.A. Maynard's Hoe and Shovel Works, of Northampton, Massachusetts, manufactured several styles of brick trowels in the late 1800s, along with agricultural tools. Their output was carried as far west as Simmons Hardware Co. in St. Louis, MO.

The works was on the banks of Mill River, below Paradise Pond. The business was originally Clement, Hawkes & Maynard, making cutlery and hoes. C. A. Maynard was Mr. Clement's son-in-law. Maynard died 1 May, 1922, age 80. His obituary stated that he had retired 3 years before, after 53 years in business.

The caption under the picture below reads:

The engravings on this page... represent what is now one of the picturesque objects in the city — the hoe and shovel works of C. A. Maynard, with a few of its products. This factory was badly injured by fire, in 1886, and will probably never again be built in its old form, but Mr. Maynard’s business is increasing so that enlargement must soon be had on the ground floor. The factory is always running full, turns out the highest priced goods in America, and gives the most value for their cost.

This photograph at Digital Commonwealth shows the back of the works before the 1886 fire.

Posted by Mark Stansbury at 5:53 AM No comments: 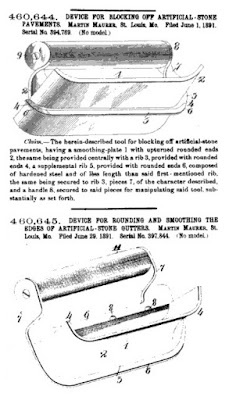 Martin Maurer operated a hardware store and machine shop in St. Louis, Missouri from 1875 to at least 1895. He invented and patented a stamped steel concrete edger and a groover in 1891,  and St. Louis city directories in the early 1890s show that he specialized in masonry tools. Maurer developed and manufactured a line of concrete tools which were still being sold in the 1904 catalog of Walter A. Zelnicker Supply Co., a St. Louis hardware wholesaler.

I have been unable to find this Martin Maurer in US Census records to get his birth date, or to find a death record. There is a mention of  him in the Cassville, MO newspaper 3 Oct. 1895, stating that he was to move to Louisiana. This could mean the state or Louisiana, MO.

Beginning in 1903, a Martin Maurer of Pueblo, Colorado received at least 8 patents for scales and improvements to scales. The first one used one of the same patent attorneys as the concrete tool patents. It may be the same person, but I have no verification of that.

Posted by Mark Stansbury at 9:29 AM No comments: